Especially for families and families with younger children I developed the ‘Family friendly tour Hoorn’; Fun for children, parents and grandparents. This tour takes us past the most important monuments and a whole collection of beautiful unicorns.

Part of this tour through the historic center is a search for the unicorns in Hoorn. The unicorn is the symbol of the city of Hoorn. Everywhere in the city you see these unicorns. On gable stones, as a statue, on signposts and in many more places. While the children are looking for Unicorns I tell the surprising stories about the old and modern history of the city.

The treasure hunt: always a prize!

At the start of the family friendly tour the children get a sheet with 12 pictures of unicorns that can be found in Hoorn. Nine of these unicorns we encounter along the way. If you manage to find all nine good unicorns on the way and mark them on the sheet, you will win a prize. But beware! If you accidentally mark a unicorn that we didn’t encounter, the prize goes to the parents. 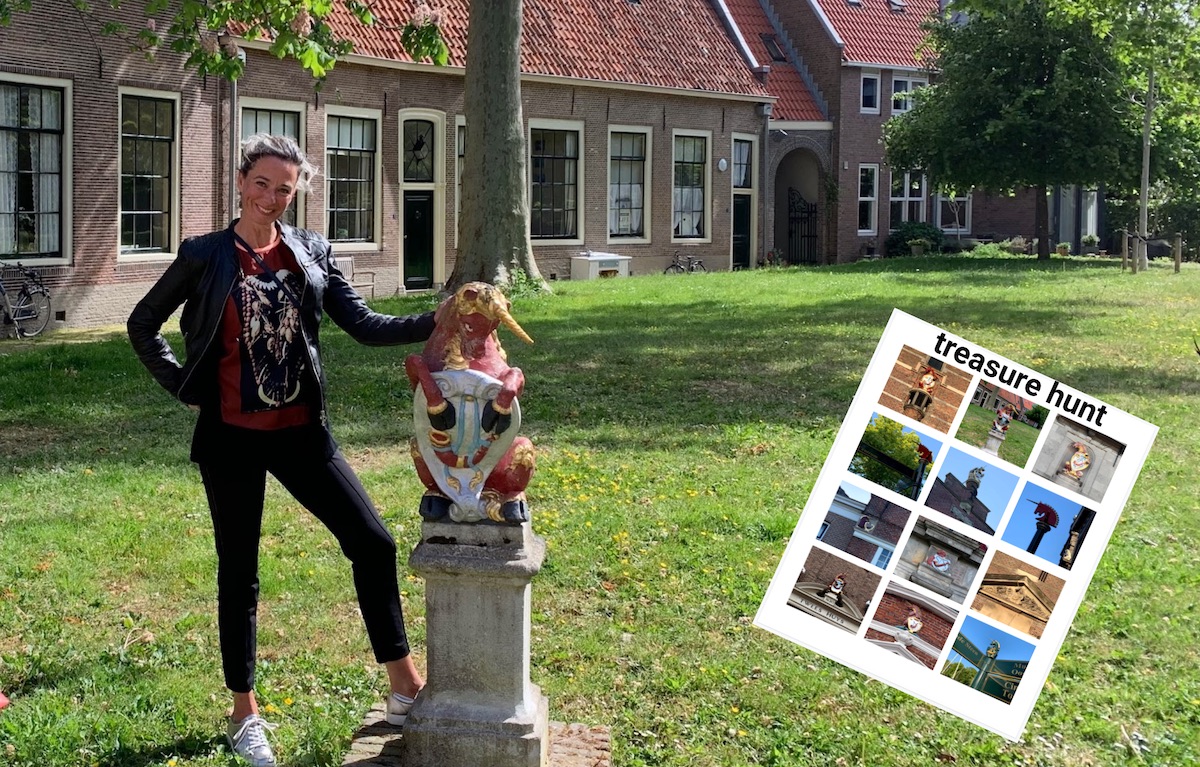 The best starting locations for this walk are city square ‘De Roode Steen’ or parking lot ‘De Nieuwe Wal’. The route takes us along wide quays, stately streets and exciting narrow alleys. Along the way we’ll pass at least the following historical sites and monuments:

Depending on the starting point we will (preferably) also visit the Orphanage, the Statenlogement, Eastern gate (‘Oosterpoort’) and the Bossu houses (‘Bossuhuizen’). Unfortunately, it will not be possible to visit all the important monuments of Hoorn in 1.5 hours.

About the Unicorn of Hoorn

There is no city in the world that has such a rich historical connection with the unicorn as Hoorn. For centuries, this animal has been the keeper of the city’s coat of arms, on which a red horn is depicted. At the beginning of the 17th century, the city coat of arms took on the form it still has today. But much more than the horn on the coat of arms, over time the unicorn has become the symbol of the city.

The earliest known depiction of the unicorn in combination with the city coat of arms is a facade stone from the old Eastern Gate (‘Oude Oosterpoort’). There are several theories about the origin of the unicorn as the holder of the city coat of arms. Possibly the unicorn refers to the ecclesiastical authority of Bishop Joris van Egmond. This bishop carried a coat of arms with two unicorns. According to another theory, the unicorn was introduced by Jan Ellertsz. This influential citizen already authenticated his letters and deeds in 1486 with a seal on which a seated unicorn holds the shield with his family crest.

For the medieval man there was no doubt: the unicorn existed. In bestiaries (books with descriptions of animals) the unicorn was described in detail. It was not until the 16th century that scholars began to doubt the true existence of the unicorn. In the centuries that followed, it increasingly acquired the status of a fabulous animal and became a symbol of strength, indomitableness and purity.

For general information about a city walk through Hoorn, click here!

For an overview of all thematic tours, click here!